This was our second family summer holiday at Mount Kosciuszko National Park.  Margie, Joe and I left home on Boxing Day afternoon 2015 and camped that night near Cann River.  We could have done the trip to Thredbo in about 8-9 hours but decided to do the driving over two days.  Jack, our eldest son, chose to stay at home this summer and catch up with his mates. The following day, after stopping at the busy tourist town of Jindabyne for some last minute shopping, we arrived at Ngarigo camp ground in Kosciuszko National Park around midday.  Ngarigo was a different camping location to the previous year but because Margie’s brother Michael and family – wife Paula, and three kids, Willem, Tessa and Evie, were camping there, and it was a scenic spot close to the river with ample recreational opportunities, we decided to join them.  It was also free camping which was an added bonus.

We conveniently parked our Jayco Dove next to Michael and Paula’s Jayco  Expanda.   Joe and Willem were focussed on riding their mountain bikes on the Thredbo downhill/flow trail.  With a chair lift ticket they could spend an entire day getting lifted to Eagles Nest Restaurant  at 1937m and riding at break neck speed down to Thredbo Village (1370m).  The only thing that slowed them down was sore arms and for Joe a flat tyre.

Walking is always on the agenda.  On the previous holiday we did a family day walk to Mount Kosciuszko summit – from the top of the chairlift.  This year we wanted to do a slightly different day walk with good views combined with an element of fitness training.  The Merritts Nature trail sounded appropriate.   Our plan was to walk up the Trail starting from Thredbo Village through different vegetation types and scenery arriving at the Eagles Nest restaurant (Australia’s highest restaurant).  The Eagles Nest also happens to be at the top of the Thredbo Kosciuszko Express chairlift.  Our plan was to walk to the top and then catch the chairlift down.  No tickets were required for the return journey.  Michael was intent to take his mountain bike with him on the walk up so he could ride back down. 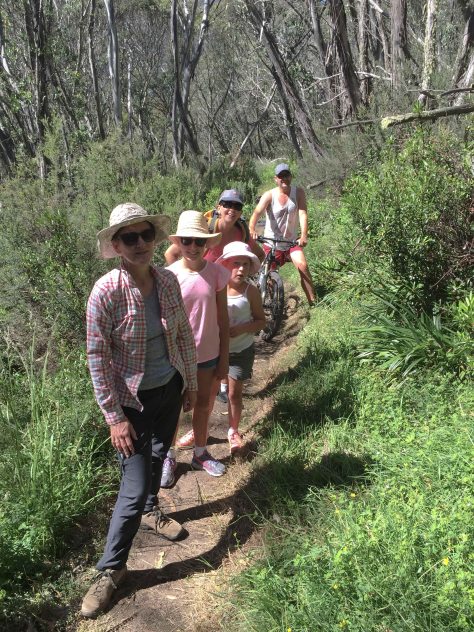 At the start – Margie,Tessa, Evie, Paula and Michael

We organised ourselves with water and snacks for the steep and continuous ascent.  We set off about 10 AM in the morning.  The weather was in the high teens  and not too hot.   The Trail follows the native bushland to the east of the chairlift.  Most walkers catch the lift up and walk down the Trail doing the circuit in a clockwise direction. We wanted to do it the opposite way, primarily because it would be more challenging and rewarding, and not costing more than a few dollars (for a cuppa at the restaurant).

So off we went. After winding our way around the Bob Sled we entered a cool gully with a crystal clear water tumbling over the rocks.  This was a perfect place to cool down and take a break.  The Trail was about 4.0 kilometres in length, climbing over 560 metres in altitude, so it proved to be quite strenuous.  We were mostly in the shade for the lower part of the walk. We passed through some nice stands of mature messmate stringy bark which survived the bushfires of a nearly a decade ago. There was stark evidence of the trees killed by the 2007 fires in close vicinity. 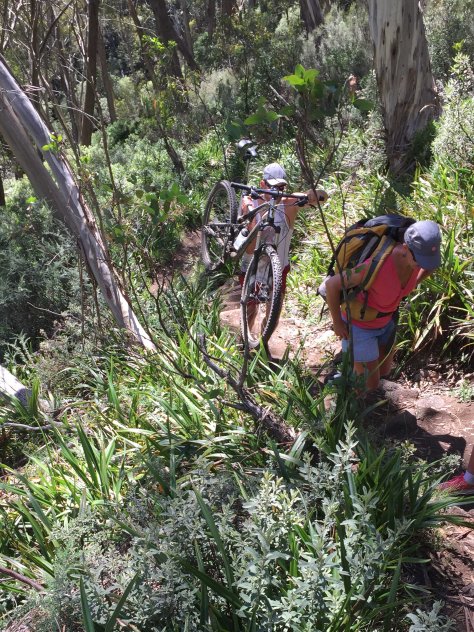 I reckon by half way up Michael was wondering if bringing his bike was such a good idea as he spent much of his time with it on his shoulder lifting it up the numerous steps!  Margie, Paula and the two girls were doing fine taking in the scenery and enjoying the physical activity.  As we got higher we started to experience the change in altitude as it became slightly harder to catch breath after a continuous grind up a long section of steps.  Great aerobic exercise to say the least . At the two thirds point we were all asking how many more steps?  I had done this particular walk by myself 12 months earlier, but my memory was vague on the extent of steps.  My statement of  “not many more steps” seemed to be a re-occurring theme.

About 2 hours into the walk we criss-crossed a service track. At this point Michael departed company and detoured hoping for an easier way to the top.  Half an hour later we emerged at the Snowgum Chair to intersect the start of the bike downhill track and met Michael waiting for us – he wasn’t lost as we thought. We were now quite close to the top.

As we gathered together a rider on a mountain bike stopped to ask Michael in a  somewhat officious tone where his helmet was.  Michael had left his helmet with Paula in her day pack.  Michael nicely explained that he had pushed his bike up from the bottom and that he was about to get his helmet from his wife who was only moments away.  The rider voiced his concern about Michael not paying for a lift ticket as riders riding the trail are apparently required to do.  He then told Michael in a provoking manner that he wasn’t to ride but push his bike down.  Michael stayed calm and common sense prevailed with an acknowledgment  that in the future Michael must pass the mandatory rider briefing and purchase a ticket before riding on the track.  He then left. 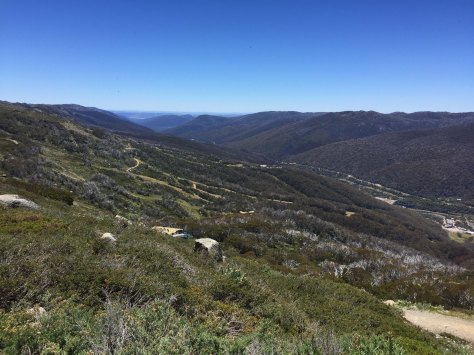 After this interlude with a member of the downhill bike riding fraternity we resumed our walk to complete the last three hundred metres to the top.  10 minutes later we reached our destination at the top looking out over the valley and mountains beyond.  We sat down in the restaurant nicely relaxed with a cuppa and took in the atmosphere with a satisfying feeling of accomplishing a hard walk.  Michael waited for Willem to come up on the lift to join him for the ride down.  Unfortunately our son Joe was stranded at the bottom with a flat tyre.

What a great experience the walk was, and to have the convenience of a restaurant with outstanding views at the finish.  Camping with the family in Mount Kosciuszko National Park, close to Thredbo, with its numerous walking opportunities, activities and amazing scenery is a great way to spend a week in summer.  What an ideal location Ngarigo camp ground proved to be. We are yet to discover a place in the Victorian high country that offers a similar range of family experiences.